Some adjustments because of Covid-19 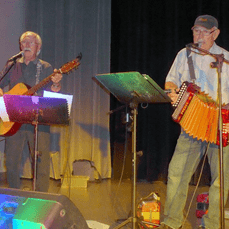 The Voices of Placentia Bay Exhibit was officially opened on Friday afternoon, July 31, in the Art Centre to an audience of about 150 people. Actor Darren Ivany was the emcee.  While introducing the speakers he played different historical characters representing the French, English and Irish.  After a welcome by the emcee the events started with Lucas White singing O'Canada and Ode to Newfoundland.

The speakers were: Scott Andrews, MP, Hon. Felix Collins, MHA, Thomas O'Keefe, president of PAHS and Wayne Power, Jr., mayor of Placentia. The official opening was completed with Town Crier Angus Gilbert reading a proclamation and the speakers going next door to the site to cut a ribbon.  Refreshments were then served intermixed with an hour of entertainment from Amy Wilson, Agnes Walsh and Con and Walter Parsons.

The exhibit is located in the Cultural Interpretation Centre and uses iPads, video monitors and a computer to display the songs, tunes and stories of Placentia Bay. These are supported by graphic displays on the walls and a recording unit for those who want to add new material.  Built and operated as a partnership between the Placentia Area Historical Society and the Town of Placentia, the display is based on collections by Eric West and resulted from a conversation between him and Christopher Newhook several years ago at Cape St. Mary’s Performance Series.  Additional material will be added over the months and people are invited to offer suitable recordings. This is expected to be seen as an important intangible cultural display.

The exhibit is open six days a week, from Monday to Saturday, during the summer and during regular offices hours at other times. Admission is free but donations are encouraged to meet ongoing costs.  The Placentia 350 Inc. committee has taken on the responsibility of helping support the exhibit.

Funds to design and build the exhibit were shared by the federal and provincial govrnments.  The Town of Placentia contributed towards the cost of the opening and also provides space for the new exhibit.

We have 86 guests and no members online